Do you teach cursive writing to your kids?

While cursive may not be many people’s favorite school subject—it certainly isn’t mine—it sure is an important skill to learn. Someone with the ability to fluently write in cursive has a distinct advantage when it comes to note-taking and essay-writing. Cursive actually activates regions of the brain involved in working memory.

Here’s how to teach cursive writing… 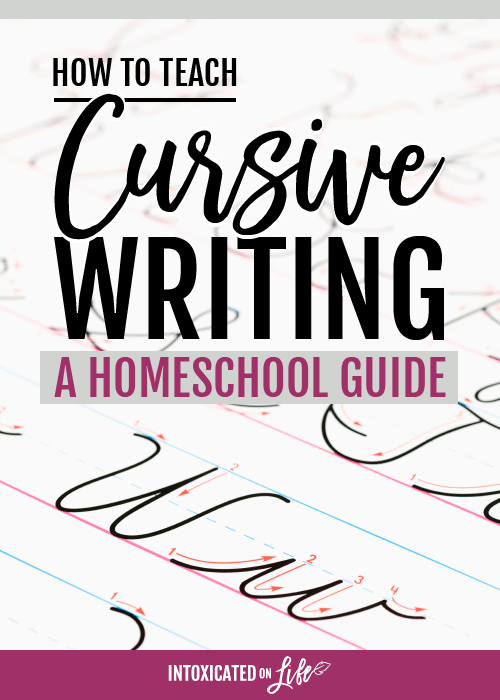 Your Brain on Cursive Writing

The development of the functional Magnetic Resonance Imaging (fMRI) machine made it possible to see activity in the brain and pinpoint which parts of the brain are being used during critical functions such as thought, speech, and writing, among others.

Brain mapping, as it is called, shows that during cursive writing both the right and left hemispheres of the brain are active. This is something that is not present either while keyboarding or writing in print.

This right-left brain synergy, when both sides of the brain are used simultaneously, promotes improved language and memory functions. Some brain researchers go further to say the more we integrate the logical (left) and intuitive (right) sides of our brain, the greater our skill at innovation — the ability to analyze problems and solve them with out-of-the-box thinking.

Researchers studying Albert Einstein’s brain found that the right and left hemispheres of his brain were uniquely well connected. I’ll let you connect the dots on that one.

Related text  How to calculate age in excel

Benefits of Cursive Specific to Dyslexia

The International Dyslexia Association (IDA), in its handbook, recommends the use of cursive handwriting. This “reinforces a multisensory approach to reading and spelling.”

Diana Hanbury King, founding fellow of the Academy of Orton-Gillingham, published books and articles citing the benefit of cursive handwriting for dyslexics.

“In the case of dyslexics, there are several reasons for insisting on cursive. To begin with, in cursive writing, there is no question as to where each letter begins – it begins on the line. The confusion with forms is not merely a left and right reversal as with b/d and p/q; it is also an up down reversal as with m/w and u/n; hence the uncertainty as to whether a letter begins at the top or the bottom. Second, spelling is fixed more firmly in the mind if the word is formed in a continuous movement rather than a series of separate strokes with the pencil lifted off the paper between each one.”1

The connected letters in cursive result in increased writing fluency (speed and smoothness). The flow of cursive means your pen — along with your thoughts — doesn’t stop moving.

This characteristic of cursive writing is shown to be especially beneficial for many struggling learners with processing speed deficits or language difficulties like dyslexia and dysgraphia.

Cursive writing is much more than an obsolete mode of writing. It is connected to our thought processes, to our retention of learning, and to our creative selves.

Related text  How to write a short story

Judy Packhem, M. Ed., of www.shapingreaders.com, is a reading specialist/ consultant and dyslexia therapist with certifications from the International Dyslexia Association and the Academy of Orton-Gillingham. She helps struggling readers of all ages become successful learners.