Cannabis vaporization is growing in popularity among people interested in consuming cannabis in an easy, discreet manner that’s healthier than traditional smoking methods. Both flower and concentrates can be vaporized using a wide range of devices. The leading benefit for cannabis vaporization is that it’s a healthier alternative to smoking flower, as vapor doesn’t release the tar and carcinogens created during combustion (the process of burning flower).

Additionally, portable vaporizers allow for easy and discreet use as the cannabis vapor creates a less potent aroma. Portable vaporizers are easy to use and fit in your pocket. Like flower and concentrates, the onset time is rapid.

The process of vaporization involves heating cannabis flower or concentrates to a temperature that turns the active compounds (cannabinoids and terpenes) into vapor. Vaporization is a healthier alternative to smoking as it occurs at temperatures that do not allow the flower to combust, which releases harmful tar and carcinogens.

There are many methods by which people vaporize cannabis. The three main types are tabletop vaporizers, portable vaporizers and vape pens.

Based on function, e-nail (electric nail) dab rigs could also be considered tabletop vaporizers. This method allows people to vaporize concentrates using an electric nail. However, a reference to the term “vaporizer” generally applies to a device that vaporizes cannabis flowers.

Portable vaporizers can be used to consume many forms of concentrate including badder, budder, and shatter as well as flower in some cases. Before purchasing a portable vaporizer, consider the types of cannabis you intend to consume and look for one designed to accommodate that product.

Vape pens are a type of vaporizer designed specifically to vaporize cannabis distillates and oils. They are called pens because the design of the vape device closely resembles that of a traditional pen. A vape pen consists of two pieces: a battery and cartridge.

Vape batteries come in a variety of styles – button or buttonless, cylindrical or rectangular, large or small – there is a shape and style to fit many personal preferences.

Vape cartridges contain a mouthpiece, chamber and heating element, which is activated upon initiated contact with a vape battery. The chamber of a vape cartridge is filled with oil or distillate, which contains concentrated amounts of cannabis cannabinoids and terpenes.

When choosing a vape cartridge, it’s important to know the type of oil contained within, whether and how it’s flavored and what cutting agents, if any, have been used to dilute the solution. This helps you anticipate the type of vaping experience to expect.

Vape cartridges are all filled with cannabis distillate that’s designed for optimal vaporization using a portable battery. During the distillation process, the cannabis oil is stripped of all flavor and aromatic compounds. At this point, it can be left in its raw form (flavorless/tasteless), it can be mixed with terpenes for extra flavor, or with some form of glycol (PG, VG, PEG) to give the vapor extra mouthfeel (thin versus thick, smooth versus chalky, dry versus buttery).

Understand How the Vaporizer Pen Works

Most vape pens have the same parts, though some will differ slightly. Basically, a vape pen works by providing power to the heating chamber, which then heats the cannabis herbs, oil, or wax, until a vapor is produced. That vapor is then inhaled through the mouthpiece. Like with any tool, there are certain accessories that are a must. While your vape pen is easily portable, it is also very fragile, particularly if you are using pre-filled oil cartridges. If you are using wax or smoking dabs, you’ll need a small airtight container to store them in. You’ll also need a dabber, which is a small metal tool used to scoop the wax up and place it into the heating chamber. Having some silicone wax mats so you don’t end up with tiny balls of concentrated cannabis all over the place is a must as well. Know Your Cartridges and Concentrates

Cannabis concentrates come in a few forms. One form is pre-filled, disposable oil cartridges. Other concentrates are referred to as budder, wax, and sugar, so named for their appearance and consistency also work best in vape pens. These are generally also easier to work with and load on the go. You can also get refillable oil cartridges. Be sure that your vape is meant to be used with the kind of concentrates you prefer. Loading your chamber by picking up your wax with your fingers is a big no-no. It can actually degrade the oil. Instead, collect a small amount from the container with the dab tool or dabber and place it into the chamber.

If you’d rather not be bothered to load and reload the chamber yourself, you can opt for pre-filled oil cartridges that are easy to replace. Simply unscrew the empty and screw on the new one. Learn to Use the Button

Your loaded vape is now ready for use! Simply press the button and inhale while keeping the button depressed. Some vape pens, especially those for use with cannabis oils, may not have the button, so all you need to do is inhale (known as “auto draw”). Small sips are generally the way to go, so avoid inhaling as hard and as deep as you can.

Related text  How to make lotion

Vape pen users have their preferences when it comes to models with activation buttons or “auto draw” (meaning they’re activated simply by inhaling on the mouthpiece). The advantage of activation buttons is that they offer more control over temperature. Most vape pens with buttons require five clicks to turn them on, three clicks to change the heat setting, and five clicks to turn them back off. The button heats the chamber as you hold it down, so be sure to hold the button down as you’re taking your hit. The button settings on a vape pen can also be a disadvantage. It’s less intuitive with more room for user error than vape pens that are “auto draw”. Pro tip: when you first purchase your vape pen, be sure to read the instructions on button settings, heat settings, and what the indicator light means.

Keep It Charged and Stored Properly

If you plan on carrying your vape pen with you as you travel to or from a Denver vacation, it will be important to have a storage case that is airtight and smell-proof. Many cases, such as Stashlogix, have room for your pen as well as all of your accessories.

Other considerations for using a vape pen can include making sure that you always have a spare battery that is kept charged. This is so that you never run out of power for your vape. As stated earlier, when making your initial vaporizer pen purchase, consider what kind of concentrates you’ll want to use. Most pens work only with either oil, wax, or dry herbs. However, there are some nifty all-in-one vaporizers that are slightly larger than a vape pen, but still pretty nice to use. If you don’t want to deal with the hassle of recharging a battery or the maintenance of keeping a vape pen filled, then a disposable vape pen is the way to go. These single-use pens are generally smaller and even more discreet than their reusable counterparts. Disposable vape pens generally one-piece units, with no removable battery, no refillable heating chamber, and no button (auto draw). Once the oil/concentrate supply is depleted, you can simply discard it. It’s a great alternative when traveling in legalized states and leaving it behind when you head to the airport or the border. The Perks of Learning How to Use a Vape Pen Related text  How to reheat steak

*Search our Online Shop to check current availability. Not all Airo Pro vape pen cartridge varieties may be in stock.\

These are the original unflavored, raw, pure cannabis nectar vape cartridges, created using the finest, high-potency cannabis. These raw CO2 oils are extracted by The Farm in Boulder, Colorado and available in:

AiroPro naturally-flavored oils are high-potency, pure distillate oils. Adopted from time-tested botanical oil extraction methods used by other industries, such as cooking oils, distillate oils are the closest thing to an essential oil of cannabis, which provides optimum purity.

This purity allows for crafting a unique aroma, flavor and experience profile into each cartridge. The process is enhanced by the use of naturally-derived non-cannabis terpenes, blended to mimic the molecular structure of specific strains combined with discreet natural flavors. These distillate oils are available in the following profiles:

Before we get into the juicy stuff, it is important to take a moment and briefly explain how most vape pens work. Unlike the traditional “roll up and light up” method which combusts your weed, vape pens operate with their own ovens that use air to heat up your concentrates – known as convection heating. The air inside the chamber is heated to temperatures ripe for extracting the THC from your wax or oils – avoiding combustion altogether.

However, many marijuana users struggle to find that sweet spot since it depends on hitting the right temperature in order to get the benefits of those cannabinoids and terpenes. 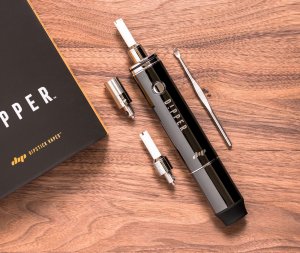 (One unit we tested here was the Dipper from Dipstick Vapes.  The removable ceramic heating element and portability made it an ideal choice for a handy multifunctional small unit – editor)

The Downside of Vaping at Low Temps

Vaping at temperatures below 356°F is perfect for getting the best of terpenes but not so many cannabinoids.

Many users stay behind the “tried and true” method of vaping at low temperatures and will do so to avoid combustion or their wax fading away. However, vaping at temperatures lower than 356°F only releases terpenes and not cannabinoids. Most people don’t know this and think that vaping at this temperature is most efficient but instead, they end up getting weaker psychoactive effects. This is usually perfect for medicinal marijuana users but for recreational vapers, not so much. At that point, cranking up the heat is your best bet. 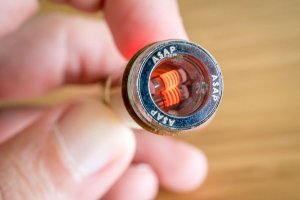