This step, along with the next step, are the most difficult to teach because there are so many possible starting situations. Luckily, after these steps it takes very little effort to solve the rest of the cube, so please be patient on steps one and two.

In this step, it is important to remember that the very center piece of each side of the cube doesn’t move, making it that side’s respective color.  You must bring all of the other pieces with that color to that side. In the example below we bring the red/green piece to match with the red and green sides.

Below are the most common moves for this step.  If your cube doesn’t match any of the three starting positions shown below you may need to move some pieces around to get there.  You must do this on four sides in order to make a cross like the “after” picture below.  So in the example below, I would first get the red/green block in the correct spot (as shown in the “after” picture) then do the yellow piece, then blue, then white.

Beginners method to solve the cube

Understanding on how the Rubik's cube works

The first step of the beginners method to solve the 3×3 is to visualize the Rubik's cube in the three dimensions. It is not as easy as it looks like. When you see the 3×3 cube, you need to stop thinking it is just colors moving around, that should be randomly mixed. The earlier you think about it, the better you will be with learning the beginners method.

Visualizing the cube consists in being aware of the different pieces (also called cubies). There are three types of cubies : the centers (pieces with one color), the edges (pieces with two colors) and the corners (cubies with three colors). 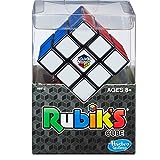 Let's come back on the centers. Every center has a given color. The centers of the Rubik's cube do not move between each other. The red center will always be opposed to the orange center. Same for the blue and the green. And the yellow and white. Try to mix your cube and verify this : opposite colors stay opposite whatever turns have been made.

The centers do not move and should be considered as fixed in space. Around the centers, we are going to build the different faces. Now, you need to start thinking : Around the white center, I will build a white face. Therefore, I will bring the four white edges and the four white corners around the white center. This will bring me closer to the solved state.

If this is a bit unclear to you, it is easily possible to pull apart the Rubik's cube 3×3. Once the different pieces (or cubies) have been separated, you can easily understand how the puzzle is built. And also how it works internally.

To disassemble turn one of the face of 45 degrees (half of a 90 degrees turn) and use a screwdriver to pop out the edge piece. It also take a bit of time to build it back but this work is full of information. This is a very good exercise to understand how the Rubik's cube works.

Our solving method in detail

Even if many different methods, formulas and algorithms exist on the Internet, I chose to select and present the simplest to you. This will allow you to solve the Rubik's cube 3×3 in a record time.

The beginners method is made of 7 distinct steps, divided into two main parts.

This method is called a layer by layer solving method. The last layer needs four steps to be solved but the first two layers are really quick. The last layer is the longest part of the solve, because the more you already solved and the more the algorithms need to be careful not to break what was already achieved. But do not worry, I prepared for you formulas that are easy to use and to learn.

If you do not have a Rubik's cube yet, have a look at our guide to buy the best Rubik's cube.

Please note that the fastest Rubik's cube solvers use an improved version of this method that allow them to solve the last layer in only two algorithms. The downside is they need to learn a lot of different formulas to be able to solve any case. This is for the day when you will be a champion !

If you feel like you are going to be passionate and become a speedcuber, I would advice you to get the MoYu Aolong v2, best speed cube ever !

Related text  How to lose 15 pounds in 2 weeks 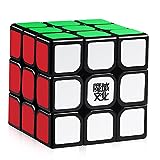 step 3 : How to solve the second layer of the cube

Congratulations ! You now have the first layer of the Rubik's cube completely solved. Do not get too excited about it. Indeed, many people are stuck at this step and can not progress to the next one. With a bit of intuition and the few tips and algorithm I am going to give you, this is going to be easy.

At this stage, every move on a layer (which is not the bottom layer) will break what has been built before. This is why we are going to use algorithms. Breaking the first layer is fine as long as it is temporary and that it will be built back afterwards. Solving the second layer is an essential step in the layer by layer method. Let's start with a concrete case on how to solve this second layer !

Once you are at this step – the first layer has been solved – I would advice you to flip the cube. Now the white layer that is solved is located on the bottom of the cube. This is a very important tip and will save you a lot of time if one day you want to become a speedcuber. If the white layer is solved, why keep it on top ? Indeed, it is better to put it on the bottom so that we do not see it anymore. We can then focus on all the other pieces that need to be solved.

Related text  How to remove security tag from clothes

Now the cube has been flipped, if you turn the top layer it has no effect on the bottom one. And thus, it does not break what has been already built. We are going to use this upper layer in the algorithm moves but also for preparation move. The first step is to locate one edge belonging to the second layer. It should be easy to find one the top layer, this is an edge that does not have yellow as part of its two colors. For instance the red and green edge is a good choice. The red and blue too. There are two other good examples, but I will let you find them !

To solve the second layer, you will need to follow the 3 following steps :

There is a last case though that can happen. It is not the best one but it also needs to be solved. This case is called the flipped edge. It happens when one edge is in the correct location but flipped. The technique here is to first get this flipped edge out of the correct spot, by inserting any other edge. Then the unsolved edge is on the top layer and you can apply one of the algorithms above. Be careful to now insert it with the proper orientation.