All cars have batteries. The ones in petrol and diesel cars are used to run the 12V electrical system (lights, stereo, heating, etc.) and generally use lead-acid chemistry. These batteries are designed to last for many years but they aren’t as energy dense as the lithium-ion batteries found in mobile phones, nor do they like to be fully drained and then fully recharged. For this reason they’re kept topped up via an alternator (or dynamo in classic cars).

Running your 12V battery down completely — for example by leaving the interior light switched on —  is actually quite damaging to its long-term health. You can revive it via jump leads, but its efficiency will have been reduced.

If you find your electric system is having problems it may be down to a sluggish battery, and it will need replacing. Fortunately, this is an easy task and only requires basic tools. In most cases this procedure will take only half and hour or so.

How will I know when to replace the battery?

It’ll be obvious when your battery is completely flat — the central locking may not work and you won’t be able to start the engine — but knowing when a battery is reaching the end of it life is trickier.

If you come to the car and find the battery is flat, you should still be able to start it up. Find the battery (usually under the bonnet, but check the car’s manual if you’re not sure) and use jump leads or a battery trickle-charger to send electrical charge from an external device directly into the 12V system (there should be instructions with the device).

You may also “bump start” a manual car. You do this by switching the ignition to “on”, depress the clutch and engage first gear, then have someone push the car forwards. Once you have sufficient motion, step off the clutch; this connects the moving wheels with the engine, turning it over and hopefully firing it up.

Once it’s started, take it for at least a 20-minute run to charge the battery. When you get back, turn the engine off and restart it the next morning. If it’s flat again you’ll know there is a problem somewhere.

The first thing to do is check the battery leads are secure and clean.

Next, check the battery’s state of charge by either looking at the indicator eye (not present on all batteries), sampling the electrolyte in a battery hydrometer (not possible on sealed batteries) or perform a battery load or drain test with a suitable meter.

If it’s low, you should try replacing the battery with a new one.

Why change your battery?

Aside from the obvious inconvenience of being stranded somewhere without leads or someone to give you a bump start, a dead battery may require you to reset a car’s systems, such as the throttle position sensor, audio system, clock and more. This is undoubtedly time-consuming and Haynes strongly recommends fitting a new battery as soon as possible.

How to change your 12V battery

Parts that you may need

Please note: all cars are different so if it is time to change your battery, you may want to look up instructions for your specific car at Haynes OnDemand. There may even be a video tutorial.

To change out a battery on a Mercedes-Benz, you will need to have the following tools on hand:

Aside from these tools, you will just need the right kind of replacement battery for your Mercedes.

The price for a new battery on a Mercedes-Benz will generally range from $280 to $400. However, you can cut the cost of battery replacement by as much as $100 and sometimes even $200 if you opt to do the replacement work yourself. You can generally save by choosing aftermarket batteries over OEM ones.

Related text  How to find a boyfriend

Select a Replacement Battery for Your Mercedes-Benz

Any battery that goes into your Mercedes-Benz must match the group size of the old battery. The majority of models from the automaker are equipped with an AGM H8 battery. As you shop around for a replacement battery, it should probably be a Group 49 AGM battery.

The best batteries for a Mercedes-Benz are generally the absorbed glass mat (AGM), which offer high accessory load for vehicles in this class. The battery should also have the same cranking amp and reserve capacity as the old battery.

The basic specs on a Mercedes battery are as follows:

Most Mercedes cars come with a BCI Group 49 battery.

Recommended replacement batteries for a Mercedes-Benz include:

If you are concerned about replacing the battery in your vehicle with an exact match, consult the user’s manual or contact the dealership that sold you the vehicle to identify the battery type. 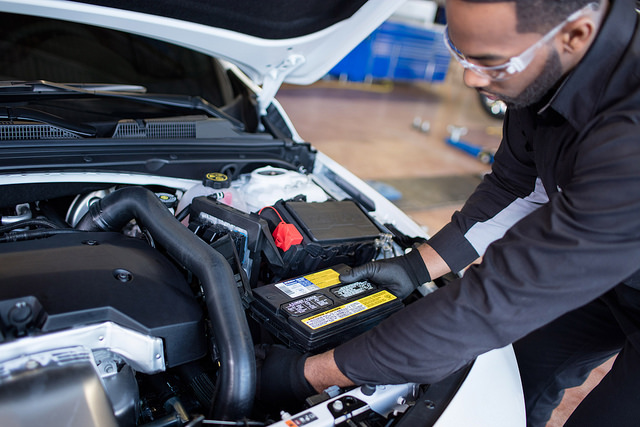 When you go to start your car and it takes a little bit longer than normal to get going, this could be a sign it’s time to get your battery checked and possibly replaced. It could be a fluke that day, but if it happens more than once you should definitely get it checked out.​

The first thing you’ll need to do is gather the equipment you’ll need for the replacement. You’ll need:

Completely turn off your car and engage the parking brake, and you’ll be ready to go. Be sure to check your driver’s manual to see if you’ll need to input radio and navigation codes after you install the new battery. Either use a memory saver or write the codes down so you can re-enter them later. This will ensure that your radio and navigation system will continue to function properly after your battery replacement.

Start by putting on your gloves and safety glasses. Remove the battery cables, but be sure to remember or label them as positive and negative; this way, you won’t mix them up later. You’ll also need to loosen the battery hold-down clamp that connects the battery to the vehicle using your ratchet and socket. Next, loosen the negative and then the positive battery terminals, and pull off the battery posts. Now, all you’ll have to do is lift the battery out of the car—use your legs, it’s heavy!

Related text  How to roast cauliflower

Gather the parts and tools

As it turns out, changing a car battery is actually an incredibly simple process, so there aren’t a lot of tools or parts needed. For tools, the only thing I needed was an adjustable wrench, pictured here. I had received a Black & Decker Tool Set as a wedding gift, which has come in handy many times, so I already had the wrench. If you don’t have the tool you need, you might want to see if you can borrow it from a friend or family member first, especially if you’re just starting to learn these skills and you aren’t sure you’ll really keep them up. You don’t want to go out and spend money on something you won’t end up using again. On the other hand, if it’s a tool you will be able to use for multiple other projects down the road, investing some money in a good one could be a good decision.

As for parts, all I needed was a new battery. I first checked the typical auto parts stores online and found batteries ranging from about $100-125. Costco was my next target, and I found that I could get one there for $74 with a 3-year warranty. Pretty good. But I was lucky to have mentioned my goal for changing my battery on a Mr. Money Mustache post, and one of his readers suggested I check some local junk yards for a used battery. Since I’m already planning on replacing this car in the near future, the potential for reduced cost was worth risk inherent in this approach. Plus, this felt like it totally fit in with my newfound spirit for learning something new.

The main lesson here, and it’s one I learn over and over again, is that the easiest or default way of doing things is rarely the best. If I had simply chosen Costco over a typical auto parts dealer, I would have saved $25-50. By choosing a used auto parts dealer, I saved another $34. A little time spent on research saved me a decent amount of money.