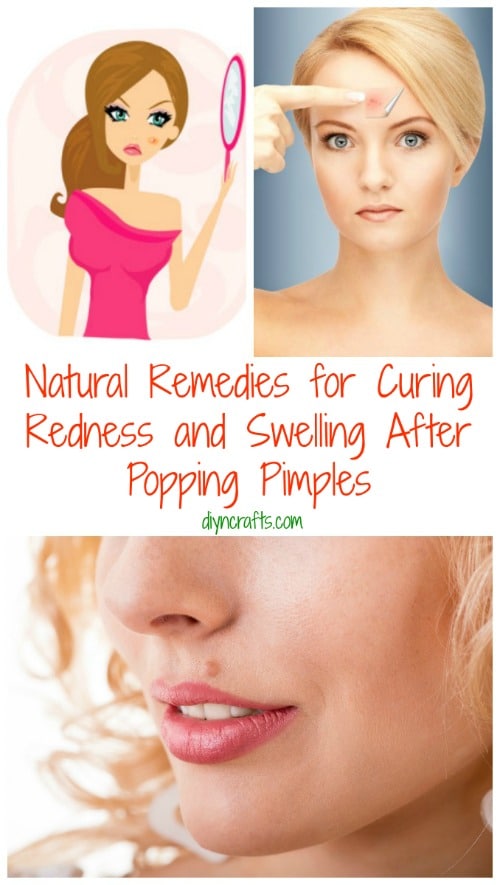 Popping a pimple is never recommended. Not only can it spread the bacteria that causes pimples, it can leave major redness on your skin. If you have popped a pimple and you notice redness, swelling and soreness, there are a few things that you can do to eliminate them.

First, you can try an ice cube to bring down redness and swelling. Just rub a piece of ice on the spot for a couple of minutes in a circular motion. Wipe off the excess moisture and then apply an over the counter acne remedy that contains salicylic acid or benzoyl peroxide.

You can also use green tea. Just soak a green tea bag in boiling water for a few minutes and then apply it to the skin. Be careful that you do not burn yourself – allow the bag to cool for just a few seconds before you touch it to your skin. Green tea will soothe the pain and can help with swelling as well.

Clear Eyes, the medicine that gets the red out, can also be used to reduce redness. It works by shrinking blood vessels and you can just dot it on red spots and they will disappear. This doesn’t last long however so you may need to carry it with you if you want to keep the red away for the entire day. Add a bit of Neosporin to the open area as well. Neosporin will kill any remaining bacteria and infection so the spot should begin to heal overnight.

Some creams can be effective in reducing redness. Hydroquinone is a skin lightening cream that can slow down the production of melanin (the pigment that gives our skin color) in the skin. This works better on those with darker skin tones where blemishes have a browner hue.

In some cases where red spots are indented in the skin, for example with acne scars, topical treatments will not be effective. In these cases, targeted light treatments may be able to reduce redness and restore an even skin tone. IPL, also known as flashlamp therapy, is a non-invasive treatment that targets the lower levels of the skin (dermis) using high-intensity pulses of visible light. This causes micro-injuries to the skin which helps encourage new collagen production in the affected area, resulting in a more even complexion. IPL is similar to laser treatments in the fact that they both use light waves, but laser treatments use a single wavelength of light while IPL uses a broad spectrum in combination with filters.

Another way to get rid of redness on the skin is to encourage the turnover of skin cells so that the skin heals faster. This can be done through exfoliation. Exfoliation sloughs off dead skin cells, revealing new skin underneath. When you typically think of exfoliation you may imagine a salt or sugar scrub. While these manual exfoliants can be good for everyday skin care, chemical exfoliants are usually more effective in penetrating the skin deeply.

BHA or beta hydroxyl acid is able to go deep into the pores, removing oil and getting rid of dead skin cells and buildup that can create redness and breakouts. AHA or alpha hydroxy acid generally works only on the surface of the skin, which is still helpful in lightening the skin and reducing redness, but not as good at getting deep in pores to treat acne or breakouts. Two common AHAs are glycolic and lactic acid.

Try a natural remedy to get rid of red spots

While they are often not as potent as over the counter treatments, sometimes a natural remedy can help reduce redness with the added bonus that you probably already have the ingredients for it in your kitchen. One redness reducer you can try is putting sliced, chilled cucumber on the red spot for 15-20 minutes. Cucumbers contain vitamin C that acts as an anti-inflammatory and the cold temperature helps bring down any swelling in the red area. Green tea is another anti-inflammatory ingredient.

To unlock its benefits, simply steep several tea bags in a pot of boiling water. Then, soak a washcloth in the tea and use it to cleanse your face. If your red spots are from dryness and irritation and not acne or a breakout, you can try putting coconut oil on the red spot. Coconut oil is a powerful moisturizer and emollient that can restore moisture to the skin, helping to reduce dryness and redness. Don’t use it if you have acne or a breakout though, as it is very thick and can sometimes clog pores.

How to Use Aspirin to Treat Acne

Because it’s a home remedy, there’s no one protocol for using aspirin to ease acne. However, most approaches follow the same general process:

Proponents say that applying aspirin masks can relieve redness and swelling. If you use this home remedy often, be aware that it can lead to skin dryness. You should also make sure to wear sunscreen, since salicylic acid can make your skin more sensitive to the sun’s rays. Your dermatologist can explain more about salicylic acid and other pimple treatments.