An introduction to the classic bar game of table shuffleboard.

Table shuffleboard is one of my favorite bar games.

One of the reasons I love it so much is that pretty much anyone can play shuffleboard. And most people take to it right away.

But some people decide that the game looks strange or complicated, and they decide it’s not for them. If that’s you, you’re missing out.

Don’t worry. After reading this guide, you will know how to play shuffleboard.

So the next time you find a bar with a shuffleboard table, you’ll be ready to join in the fun.

This post will begin with a basic overview of how to play shuffleboard with two or four people.

Then we’ll go a little deeper into basic scoring principles technique and equipment.

You and your buddy see an empty shuffleboard table. You decide it looks fun and want to give it a try.

Here’s how to play a game of shuffleboard with two people.

You and your opponent will stand at the same end of the table.

Decide who gets the red pucks and who gets the blue pucks. There are eight pucks total. These are also called weights.

Now decide on how many points to play to. The standard numbers are 15 or 21.

You will alternate turns sliding your pucks towards the opposite end of the table.

Your goal is to shoot your puck as far down the table as possible without falling off.

Your puck must slide beyond your opponent’s farthest puck to score. It must land in a scoring section, of which there are three.

Only one player can score per round.

You can also knock your opponent’s pucks off the side or end of the table. Hence the name of the game – “Knockoff”.

And you can make contact with your own pucks to push them into better scoring positions.

After shooting all 8 pucks, you have completed one round.

Both players now move to the opposite side of the table to review the puck locations.

Do not touch any pucks until both players agree on the score for that round.

After determining the score, begin the next round from this end of the table.

Rounds continue until one player reaches either 15 or 21 points.

How to Play Shuffleboard with Four People

First, choose your teams of two.

You and your teammate stand at opposite ends of table, each standing next to an opposing player.

You stay at your end of the table for the whole game. No alternating sides in this one.

Otherwise it is the same as 2-person shuffleboard.

You and your opponent alternate slides towards the opposite end.

Try to slide your puck into scoring positions. Only the farthest puck(s) of the same color will count. You can also knock pucks off the table.

And, a bonus is that your partner can offer some guidance from the other side.

After you agree on the score for that round, the next team begins their turn, shooting from their side of the table.

Four person games are usually played until one team reaches 15 or 21 points.

Playing doubles is a great way to enhance the social aspect of the game and get more people involved.

A note about shooting order in shuffleboard matches:

Shuffleboard matches may begin with a coin toss.

Winner of the coin toss gets to choose to either shoot last (be the “hammer”) or pick a color.

Most people pick to shoot last for the first round.

In shuffleboard it is an advantage to shoot last in a round.

This is also known as the “hammer”.

The hammer gives you the last chance to clear an opponent’s pucks off the board, or advance your own pucks into better scoring positions.

After the first round, players should alternate shooting order as follows:

An Overview of the Shuffleboard Table, Pucks and Accessories

The game of table shuffleboard has some unique physical features. In addition to reviewing the rules of how to play this game, it’s also helpful to know more about the equipment you’ll be using.

Here’s a quick review of essential shuffleboard equipment. Starting with the table.

A shuffleboard table has a long and narrow playing surface.

The playing surface of an official table is 20′ 8″ long x 20″ wide. And the height of the table to the top of the playing shuffleboard surface is 30 inches.

If you’re at a bar with a full size shuffleboard table, consider yourself lucky. It’s a real pleasure to play at this scale.

But to fit in the tighter spaces of bars and basements, recreational tables can range anywhere from 9 to 20 feet.

A common length for a barroom shuffleboard tables is 12 feet.

Recreational shuffleboard tables also vary in width. But it’s definitely more fun to play on a table with a surface that is at least 18” wide. This allows for adequate spacing between the pucks on the table.

Shuffleboard tables have hardwood playing surfaces. High quality surfaces are usually made from maple and coated with epoxy to protect against dings and scratches.

Most surfaces are also concaved. This means the center line angles inward to keep pucks from wandering off.

If you own a table, clean, wax and spray the surface with silicone on a regular basis to maintain it.

What’s that powder for?

You may notice that powder covers the playing shuffleboard playing surface.

Shuffleboard powder is sometimes called salt or wax. But the powder is actually made from silicone beads and cornmeal.

The powder helps provide a fast, smooth and straight glide.

You can apply a new coat for each game.

Also, a player can apply powder from the gully if they notice dry spots before a shot.

Stay tuned for more posts about how to play shuffleboard, including technical tips, an overview of variations on the popular “knock-off” format, and some of the best bars with shuffleboard tables in the US.

And for some more inspiration, check out this shot:

The History of Shuffleboard from Bower’s Corner

How to Play Table Shuffleboard

Here are some basic notes on how to play shuffleboard—from just prior to the game to the very end.

Prior to the Game

Prior to beginning a game of table shuffleboard, the two individuals (or teams of two in “doubles”) will flip a coin. The winner of the coin flip can either have his choice of the red or blue-colored pucks; or he may choose the order in which he—or his team—will shoot (who will go first and who will go second). Because there is no real advantage to shooting with either the red or blue pucks, in most cases the winner of the flip will elect to shoot last—a position known as “the hammer.” In table shuffleboard, being the hammer carries with it a pretty good advantage, given that the last player has an opportunity to knock an opponent’s winning puck off the table.

Related text  How to lock a row in excel

Prior to the game the two sides must also agree on how many points it will take to win the game. In regulation table shuffleboard, games are played to 15 points; but in many recreational settings the game is finished when one team reaches 21 points.

Each player or team plays with 4 pucks.

The following list will give you a great idea of how the game of table shuffleboard is played from start to finish.

When learning how to play shuffleboard, ensure you have the following items beforehand:

Instead of a tabletop, you can use a bank-board which is equipped with cushions at the sides of the table instead of gutters. You can use a regular table as well, however, it must be smooth enough for the puck to slide across. I would recommend using the original tabletop as it is much smoother and slipperier, and the pucks will not harm it as much. It is easy for the puck to bounce off a cushion and so, a table with gutters is preferred.

Coins can be used as replacements for pucks as they are easily available. However, I would not recommend using them if you had any other choice. You might have noticed that coins have small ridges at the edges, these can seriously damage the smoothness of the board. I recommend good old pucks for the best play. 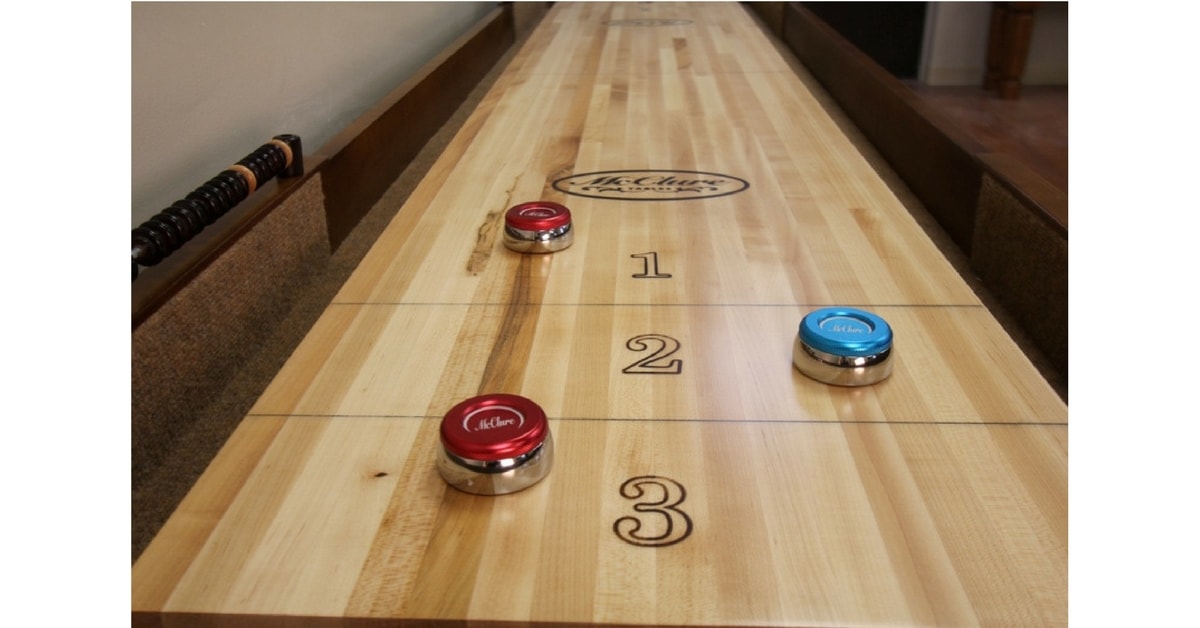 Shuffleboard wax is great to use on a traditional lacquer board, but it can be slow as you need to buff the wax in. The fastest alternative is an aerosol polish which could be harmful to your health. Powder works great as well, however, it can be easily used in excess and the pucks will end up plowing the powder, slowing them down.  I have found the shuffleboard wax to be the best for beginners learning how to play shuffleboard.

About the shuffleboard poster

Here is more of what this product entails: