Skip to content
Related text  How to make mexican corn

The next player to the left must then place a matching domino next to the first domino. For example, if the first player started the game with double six, the next player must play a domino that has a six on it.

If there are if no more dominoes left, the player must pass their turn. 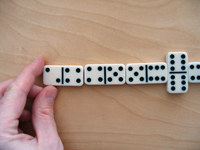 This diagram shows two ways to place dominoes at the end of the chain. Both ways are correct. Note that doubles are always placed perpendicular to other dominoes.