Cortisol is one of the main hormones produced by the adrenal glands. It’s known as the stress hormone because it’s released during times of physical and emotional stress. It increases your heart rate, blood pressure, blood sugar, and breathing rate to give you a natural energy boost to take on whatever stressor is coming your way. That’s a good thing in the short term, but being chronically stressed can lead to high cortisol levels all the time, and that can have a serious impact on your health.

Here’s how to lower cortisol levels.

Meditation activates the body’s relaxation response through the HPA axis, the central stress response system. This lowers cortisol and slows your breathing rate, relaxes muscles, and reduces blood pressure. It also stimulates regions of the brain that control worrying. People who completed an online mindfulness program for one hour a week for eight weeks reported a 31 percent decrease in stress levels a year after the program.

3. Eat a healthy carb at dinner.

It might sound counterintuitive, but a small serving of a healthy carb at dinner like quinoa, brown rice, squash, or sweet potato can actually regulate blood sugar levels and help you have a better sleep. Cortisol and insulin have an inverse relationship, meaning when cortisol is high, insulin is low, so that healthy carb in the evening, spikes your insulin and lowers your cortisol. This helps you to relax and prepare for bed and a restful sleep.

If your current lifestyle leaves you lacking in time spent outdoors, a dose of nature could be just what you need to help lower cortisol levels. When a group of people were sent to either spend time walking through a city or in a forest for 20 minutes, cortisol levels in the forest group were significantly lower. In another study, a group people spent time walking through a forest one day and through a city another day. The forest environment promoted lower cortisol, more parasympathetic nerve activity, lower blood pressure, and lower pulse rate than the city environment.

Sleeping in time with your body’s biorhythms and getting enough quality sleep can help you lower your cortisol levels naturally. Ideally, getting to bed by 10 p.m. will help you avoid a late evening cortisol spike which could make it hard to get to sleep and sleep soundly. This also takes advantage of natural melatonin production, which starts around sunset to get help you wind down.

Research in the Journal of Nursing Research found that shift workers who sleep during the day have higher daytime cortisol and get less sleep per day than people who sleep at night, so if your job allows, it’s best to adjust your sleep schedule accordingly.

A healthy curve begins with cortisol levels highest in the morning, but not hours before dawn. Cortisol levels are normally lowest around 3 a.m., then begin to rise, peaking around 8 a.m. If you routinely wake up hours before dawn in a state of anxiety, your cortisol is overachieving and spiking too early. This could be happening if:

High Cortisol Levels Throughout the Day

Cortisol spikes in response to stressors like work deadlines, environmental pollution, and inadequate sleep. Ongoing high levels of cortisol can be caused by too much coffee, a lack of carbs throughout the day, or an intensive focus on schedules. If cortisol levels stay elevated, you’re wired but your adrenals are getting tired. It feels like:

If you often find yourself in heated political arguments online at 9 p.m., or if you do heavy training at the gym in the evenings, it’s likely that your cortisol levels are skyrocketing at night — right when you want them to be coming down. Some common indications of high evening cortisol levels are:

Low Cortisol Levels Throughout the Day

After cortisol has been elevated for an extended period, it can drop off completely. When it does, you feel flatlined. This usually signals adrenal exhaustion, when the overworked glands have shut down. Causes include prolonged and intense stress, sustained periods of inadequate sleep, and a general lack of physical and mental rest. Some indications of low cortisol are:

What is Belly Fat?

Sounds like a really stupid question – doesn’t it? But it’s not. In fact, it’s a really great question.

To begin with, there are three basic kinds of fat in the body. 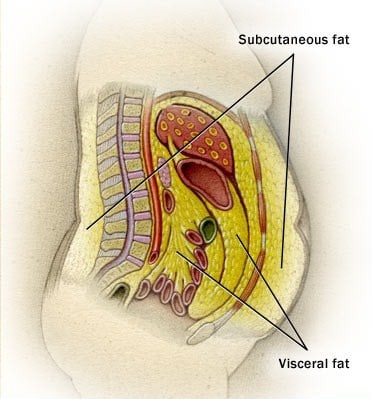 The first is the kind that causes belly fat – it’s called visceral fat, which means that it is lying around the organs located inside the abdomen. It is also called intra-abdominal fat as it lies inside the peritoneal cavity.

Excess visceral fat produces the typical “beer belly” or the “pot belly,” and it’s the kind that is most affected by your hormones. We’ll get into how to manage those hormones –  namely, how to reduce cortisol and belly fat storage – in a bit.

The second type of fat is subcutaneous fat, which is the fat lying just underneath the skin, above the muscle – it’s the “pinch an inch” fat that you can grab between two fingers.

There’s also a third kind of fat, commonly known as triglycerides, which is continuously circulating in the blood stream. Triglycerides are constantly in use by the body for a number of metabolic functions.

The visible kinds of fat – visceral and subcutaneous – are your body’s fat storehouses, and they are called upon to contribute to energy requirements when you eat less fuel than you burn.

How to Reduce Cortisol and Belly Fat Storage

There are some natural ways you can help you body reduce the amount of cortisol it pumps out and to start shedding belly fat.

Cut back on the number of calories you eat and ramp up how many calories you burn.That will force you body to dip into your fat stores for fuel, shrinking them.

A diet low in simple carbohydrates and rich in protein and fiber is ideal for burning up excess calories. This diet should also contain “healthy” fats in the form of Omega 3 fatty acids and polyunsaturated fats.

The basic principle of HIIT is to train in alternating intervals of high and low exercise intensities.

As an example, after warming up you could do an all-out sprint for 20 to 30 seconds and then walk or jog (very slowly) for the next 90 odd seconds. Repeat this cycle 6 to 8 times.

[Related: How to Do Interval Training… The Right Way]

HIIT causes an oxygen deficit resulting in a phenomenon called excess post-exercise oxygen consumption that keeps gobbling up calories as fuel for as long as 48 hours after the workout is over.

HIIT is known to target specifically belly fat as it causes certain unique metabolic changes in the body such as increased insulin sensitivity.

Getting rid of stress is a very important intervention to deal with cortisol and belly fat storage.

Meditation and mindfulness training can help immensely with this.

Related text  How to get sticker residue off glass

You might consider adding yoga to your mix as a form of physical meditation.

The take-home message is that even though diet modification and a strict exercise regime are necessary to burn up excess calories to blast bely fat, you have to get at the underlying cause.

And, when it comes to how to reduce cortisol and belly fat, that means focusing on stress reduction.

Did you enjoy this article on cortisol and belly fat?

You might also like my free Interval Speed Burst Workout. It’ll help you burn more belly fat (and faster) than doing regular cardio, while also improving your cardio endurance. Click the banner below to get it for FREE.

A detailed sleep function assessment has been crucial for determining the course of successful therapy:

This is the most common cause of insomnia in our experience: When levels of the extraordinary antidepressant neurotransmitter, serotonin, are subnormal, there is typically an inadequate surplus to use for conversion to melatonin. What results is a difficulty falling asleep (night owl syndrome) more commonly than one of staying asleep (though either or both may be present.) Either way, worries and obsessive thoughts make wakefulness unpleasant. This syndrome is often genetic and longstanding (though the severity may have increased over time.)

The following is a list of the common symptoms of serotonin deficiency, which helps us rule this syndrome in or out as a cause of the particular insomnia being endured. We ask that it be filled out using a severity scale from 1 to 10.

Note: The frequent use of benzos is not part of this syndrome.

Regarding Serotonin Testing: Blood platelet testing for serotonin levels is superior to any but cerebrospinal fluid testing and almost as hard to find. Blood plasma testing gives a rougher idea of actual levels. Research and practice have convinced us that urinary neurotransmitter testing is very unreliable. (See my article on this subject originally published in the TL 10/06 and posted on my website. We like salivary melatonin testing.