1.  Draw three circles, like a “Mickey Mouse”, the circles will determine the fullness of the lips. In this case, I’m drawing full lips.

2. Draw a V shape rooftop, on the two circles on top.

3. Now connect extend the shape like so, to create the upper lip, the line between the lower lip will have a slight curve as it follows the outline of the bottom circle.

4. Now connect the lower lip line, and draw it flat as it passes the bottom circle.

5. For frontal light, add shadowing at the upper lips and darken between the lips. The upper lip is often has a darker shadow.

6. Congratulations! You have now drawn lips in 1 minute! Now try it using this technique when drawing any lips. This technique will help you create more volume, and fullness of the lips.

I won’t go into too much detail about all the muscles of the lips and their functions because that’s not the intention of this tutorial. That information is important when studying facial expressions and Human Anatomy for Artists: The Elements of Form is a great resource for anatomy. I will briefly touch on it though, since being familiar with at least the basic mechanics is useful.

Related text  How to make self rising flour

The Red Portion of the Lips

The top lip has three forms and the bottom lip has two. These forms are like ‘pads’ covered by the skin. The rounded form in the middle of the top lip (called the tubercle) wedges between the two forms of the bottom lip. When looking at the lips from an angle, these forms overlap each other adding depth. When drawing a foreshortened object, I always look for overlapping lines to show a form is in front of another. This overlap gives the illusion of depth on a flat piece of paper.

The forms of the lower lip are usually fuller then the upper lip. Sometimes, the red portion of the upper lip is completely hidden and nonexistent.

Related text  How to make a birdhouse

The ridge that borders the bottom of the red portion is steep towards the center and softer towards the edges. The center of this lower lip region is called the pillar of the mouth, since is has two pillars that angle inward at the top. The pillar is usually in shadow (since light is commonly placed above the head) because it faces downward. This shadow shape softens left and right.

The nodes in the corners of the lips are very important players. You can see in the anatomical information section above, that many of the muscles attach at the node. These muscles pull on the node to form expressions. Look in the mirror and smile slightly. Then frown. Most of the change occurs in the nodes. Pay close attention to this shape when trying to capture a particular expression.

Related text  How to install kodi 17

With lips, I start my layins with the landmarks. Find the width and angle of the lips by indicating the corners. Since, she’s looking slightly away from us to the left, the center line will curve out and to the left. This will help me find the placement of the top of the tubercle and bottom of the bottom lip.

With the landmarks in place, lets think about those squishy little pillows. Remember how in the last video I said there are three at the top and 2 at the bottom? On her, the tubercle is flat and you can barely see it. 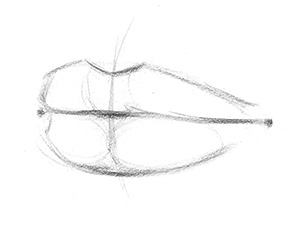 This is actually quite common. The tubercle is just fatty tissue, so its prominence will vary. The wings on the sides of her lips are very round and easy to see. The two pads on the lower lip are subtle, so the separation is kinda hard to see.