Have you ever wanted to take a screenshot on your Mac device? It is possible, thankfully, and it is not as hard as you may think about it. The Mac has the ability to take screenshots thanks to a build-in-feature. You can take plenty of screenshots as long as you have the space left on your device for it.

How to Take a Screenshot on a Mac Device?

The built-in feature is quite easy to use, and it is actually quite fun. See, usually when you take a screenshot you take a picture of the entire screen, like on your phone or other devices. To take a simple screenshot you have to hold the Shift-Command key and the 3 keys at the same time.

Thanks to the feature, you may also choose exactly how much of your screen you want to have saved. If you only want to take a picture of a third of your screen or if you only want to show someone a portion of what is there, then you can hold down the Shift-Command and 4 keys at the same time. After holding those keys, you are free to drag your cursor and resize it however you want.

If you held the right keys successfully, then you will hear a sort of shutter sound, like that of a camera when it goes off. If you do not hear this sound then you may not have held the buttons at the same time or the right ones, and might want to retake it before checking.

Where to Find Them

Once the screenshot is taken you will be able to find it on your desktop. All screenshots automatically save themselves directly onto your desktop, so no need to worry about saving them yourself. Every screenshot is saved as a .png file.

Every screenshot file will be titled by the date that it was taken as well as the time. It will state that it is a Screenshot as well. To help clarify, here is an example of what the name of the file will look like:

If you wish to take a screenshot in a way that does not involve include holding a set of buttons, then you can go through the Terminal app that can be found on the computer. This terminal app can be found by going to the Applications folder, and then to the Utilities application.

Once you are on the Terminal app, then enter in any of these commands:

screencapture ~/Desktop/macreports.jpg (names the file macreports and saves it to the desktop)

screencapture -T 10 macreports.jpg (the t stands for time, in seconds, and allows you to set the screenshot to occur after the time has run out)

I hope that this was helpful and that you now know how to take screenshots on your device. Remember to save space for them though, and delete any that you do not need anymore. If any of this was unclear, then please check in with the Mac help people.

Related text  How to take a screenshot on galaxy s5

With macOS Mojave, Apple introduces a new way to capture screenshots. This new method (Command-Shift-5) allows you not only to record static screenshot images but also lets you to video record your screen in real-time (a feature previously available in QuickTime.)

For video, macOS Mojave offers options to either record your entire screen or record a selected portion of your screen. 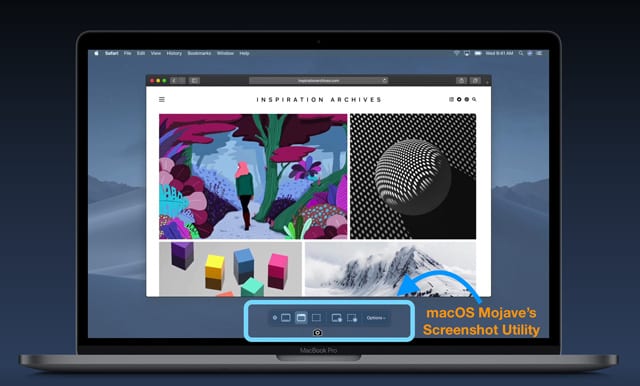 And if you want to capture sound as well, you’ll need to add a plugin like Soundflower to record the internal audio.

And of course, with macOS Mojave, you can still use Grab!

What Makes Grab So Special

Grab is an app for macOS and Mac OS X that lets you take screenshots of your screen. This little utility supports capturing the entire window, the whole screen, or only a portion of your screen.

Although other apps and utilities do similar things, Grab is a decent chap. Sure the built-in Command-Shift–3 and Command-Shift–4 shortcuts are good, but this little app is great! So why settle for just good when we can have great, all from Grab.

Related text  How to make a paper envelope

So here’s what Grab does

By clicking Grab > Capture > Selection or using the keyboard shortcut Shift+Command+A, you capture a specific region of your screen by dragging around. After selecting the desired area, the capture opens in a new window that you save on your computer.

Taking a picture of a window

By clicking Grab > Capture > Window or using the keyboard shortcut Shift+Command+W, you take a picture of a window that you select.  A prompt instructs you to choose the window you want to capture and click the “Choose Window.”

Taking a picture of the entire screen

By clicking Grap > Capture  > Screen, using the keyboard shortcut Command+Z, you can take a picture of your whole screen. A prompt instructs you to click the screen when you are ready to capture your screen.

The Coolest Feature: Taking a picture of a Timer on screen

By clicking Grab > Capture > Timed Screen using the keyboard shortcut Shift+Command+Z, you start a 10-second timer, activate part of your screen, and then take a screenshot.  Grab app captures ten seconds after you start the timer.

When you are ready, click the “Start Timer” button, and you have ten seconds to stage your shot before the screen is captured. After ten seconds,  the entire screen is being captured. Timed Screen is usually used to take pictures of your Mac’s menu and menu options.

After taking your screenshot, you see information about it by choosing Edit > Inspector or using the keyboard shortcut Command+1. Here you find your image’s view size and depth.

All screenshots default to the TIFF format; however JPEG and PNG are options you select when saving. Then use the Preview app to see and crop or make any other changes to your screenshots.

A lot of people want to change the image resolution. This app natively captures in the TIFF formats, but you can save any image to either TIFF, JPEG, or PNG using File > Save. 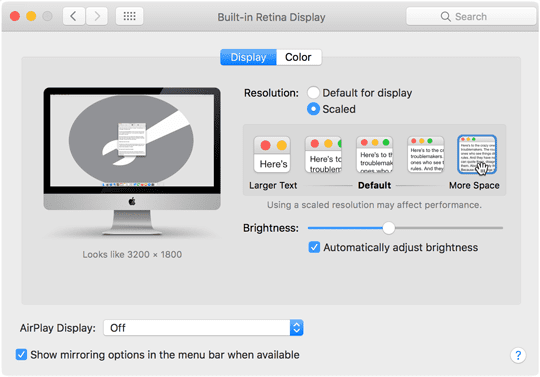 Think of it this way–it’s capturing the actual pixels on your screen. So for the best image quality, make sure you are viewing at the highest resolution your display allows.

Go to System Preferences > Displays and check that you’re getting the highest pixels available for your monitor.

The default format for saving screenshots is usually PNG.

However, using Terminal, it’s easy to change that to whatever supported format you want–with simple commands. Currently, Mac support PNG, JPG, TIFF, GIF, and PDF formats. So take your pick.